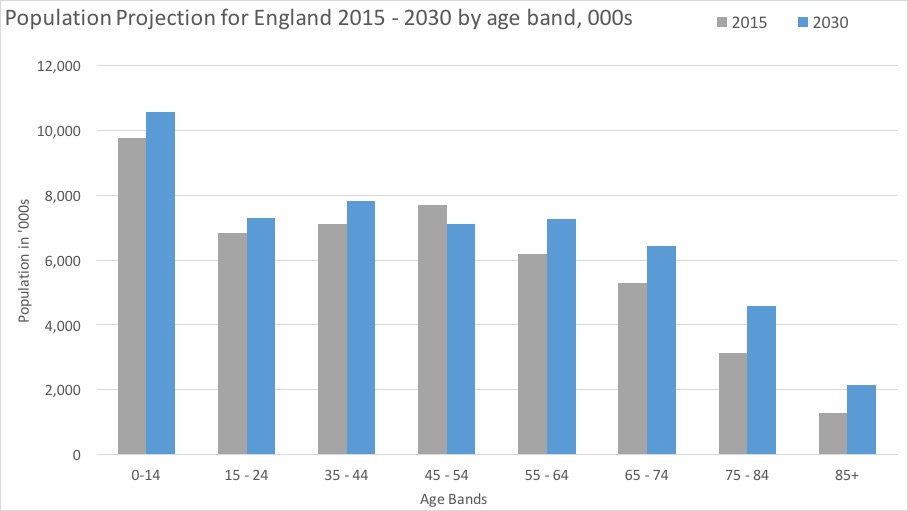 How many older people are likely to have Dementia?

How many of these older people have a recorded diagnosis of Dementia?

How many people are living with frailty?

How many older people are living in care homes?

Using data from a number of different sources it is possible to answer these questions, or at least make informed estimates.

The main data sources are:

Click here to see local estimates or read below for more information on the data sources.

The Office for National Statistics (ONS) publish mid-year population estimates every June for the previous year.  This provides an estimate of the population by local authority area by single year of age for both males and females.  The latest publication is for 2015 mid-year estimates published on 23 June 2016.

Nationally, 8% of the population in England are aged 75 and over, with around 1% aged 90 and over.

The Office for National Statistics also produce population projections.  The latest projections were published in October 2015 and were based on the 2014 mid-year estimates and assumptions for fertility, mortality and migration. 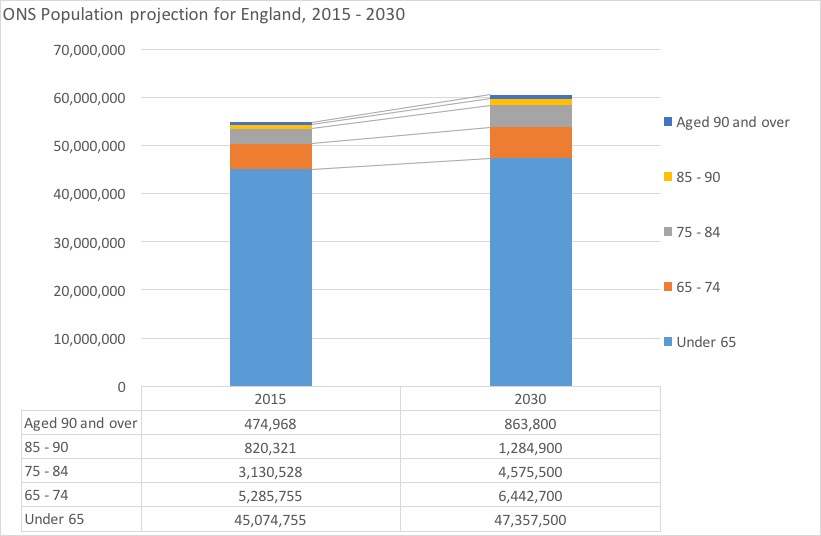 Published in 2014, the Dementia UK report presents the findings of research commissioned by Alzheimer’s Society to update the Dementia UK (2007) report. It provides a synthesis of best available evidence for the current cost and prevalence of dementia.  It provides a consensus estimate of Late Onset Dementia by 5-year age bands and gender for the population aged 60 and over.  This is shown in the chart below. It shows a steep rise in prevalence with age, particularly females aged 75 and over.  The overall age standardised prevalence is estimated to be around 7.1% of the population aged 65 and over, which is unchanged since 2007. 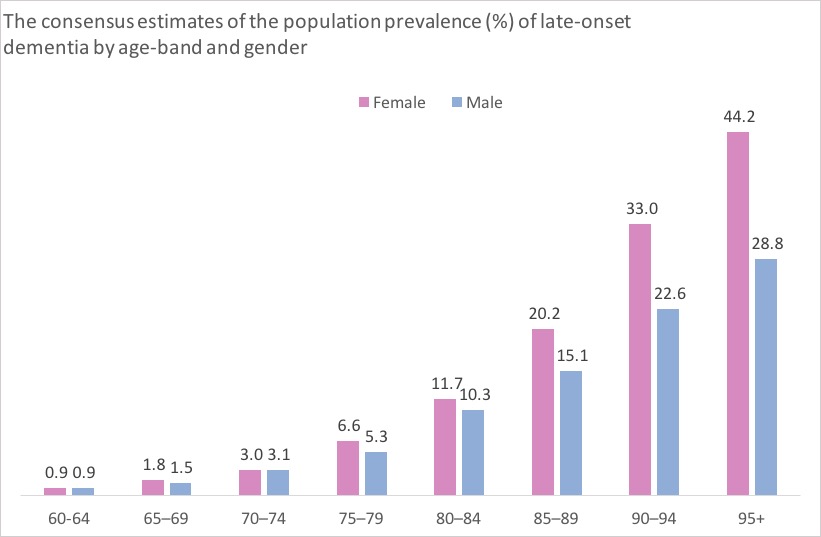 HSCIC collect data on the number of patients in England with a diagnosis of dementia recorded on their clinical record.  This data is published monthly as part of the National Dementia Strategy and the Prime Minister’s Dementia Challenge, which aim to improve the national diagnosis rate of dementia.   Recorded diagnoses are reported at GP practice level allowing aggregation to Clinical Commissioning Groups or other groupings.

The diagnosis rate is defined as the number of patients with a recorded diagnosis divided by the expected number of patients with dementia based on prevalence estimates. The difference between estimated prevalence and recorded diagnoses is sometimes referred to as the diagnosis gap – the number or proportion of people that are estimated to have dementia but have not yet been diagnosed formally.

Nationally the number of people with a recorded diagnosis of dementia is around 4.3% of the population aged 65 and over (414,000 recorded diagnoses) as at March 2016.  This implies a diagnosis rate of around 61% across England.  However, research published in the Lancet in 2013 and subsequently used as part of a wider Western Europe Policy View published in the Lancet in August 2015 suggested a reduction in dementia prevalence over a 20-year time period.  Hence prevalence rates may be lower than those used in the Dementia UK estimates which would mean a higher diagnosis rate.  For further information, see “Matthews FE, Arthur A, Barnes LE, et al. A two-decade comparison of prevalence of dementia in individuals aged 65 years and older from three geographical areas of England: results of the Cognitive Function and Ageing Study I and II. Lancet 2013; 382: 1405–12.”

Recently published work on the Development and validation of an electronic frailty index using routine primary care electronic health record data defines the population 65 years and older as “Fit”, “Mild Frailty”, “Moderate Frailty”, or “Severe Frailty” based on the accumulated deficits recorded in primary care records.  This is summarized in the chart below: 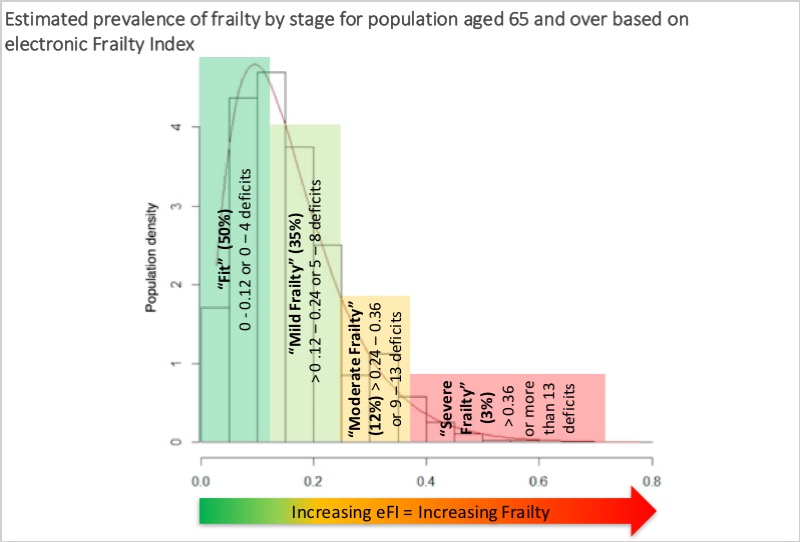 This suggests that 15% of the population aged 65+ may be considered to have moderate (12%) or severe (3%) frailty.  The work has also shown a relationship between deprivation and eFI scores. The greater the level of deprivation, the higher the average eFI score.

The Care Quality Commission (CQC) maintains a directory of all the places in England where care is regulated by CQC.  It includes every hospital, care home, GP, dentist and care home agency in England as well as other types of service like ambulances, prison care services and hospices.  For care homes, the number of beds at each location is also listed as well as the Regulated Activity (e.g., Accommodation), Service Type (e.g., with or without nursing care), and Service User band (e.g., older people).  From this it is possible to estimate the number of available beds in care homes within a local authority area, and the proportion that are for older people and whether nursing care is available.  Estimates for number of people living in care homes can then be made based on assumed levels of occupancy (how many beds are in use at any point in time).  Across England there are over 460,000 care home beds of which around 403,000 are for older people.  Just over half (53%) provide nursing care, with the remainder being “Residential care homes” without on site nursing support.

Click here to see local estimates or see below for links to useful data sources.