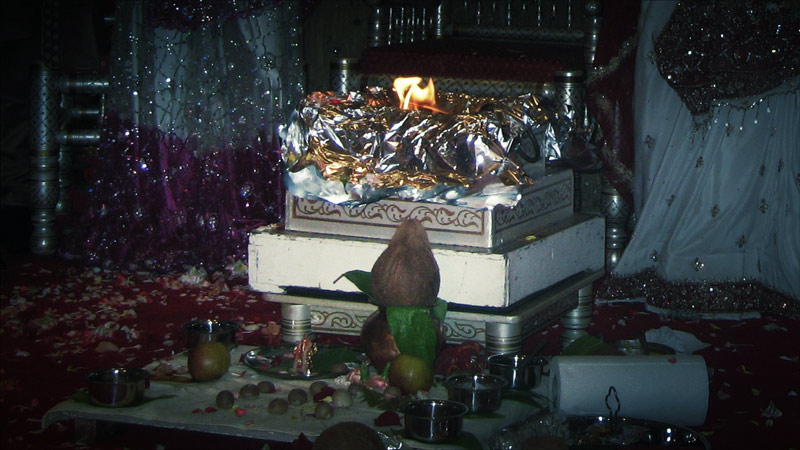 Before her stroke, Nirmala was psychologically well adjusted and lived a sociable, happy, contented life that revolved around her family, friends and the local Hindu temple (where she regularly led them devotional singing). She was also well known for her cooking and the immaculate, ordered house she kept. She also took great pride in her appearance.

The impact of the stroke on Nirmala’s daily life was profound and took its toll on her psychological status. The loss of her voice and ability to talk clearly robbed her of her love of singing and chatting with people, and she became very withdrawn and tearful. She did not want to see anyone other than her close family, and in the first few months after coming home, refused to receive visitors. She conveyed her sadness and frustration at no longer being able to cook and would not venture into the kitchen other than to access the wet room. She made it understood she felt that she was now a burden to her husband, children and family. Her motivation to improve her mobility and speech was extremely low. She also made it clear she did not care about what clothes she was dressed in. In an effort to stabilise her mood, it was decided that Nirmala should be put on antidepressant medication.

The positive effect of the care professionals on Nirmala’s mood and general psychological wellbeing cannot be underestimated. By carefully assessing her basic health, care, cultural and psychological needs, a comprehensive and sensitive, person-centred care plan was drawn up and agreed with her husband and children. The carers assigned to Nirmala could speak her native Indian languages (Punjabi & Hindi), and ensured that they engaged her in conversation, even in the early days when her ability to speak was extremely limited. Very slowly, but surely, Nirmala began to respond and interact with them, developing increasing trust and confidence in them. Nirmala’s motivation to follow her speech therapy exercises and mobilise more around the house steadily increased, and she started telling her carers what she wanted to wear each day. She now always looks forward to seeing her carers each day and treats them as friends. Although it is not always possible, the company who employs Nirmala’s carers makes every effort to ensure that she gets the same ones long term, to foster such positive relationship building.

The other person outside her family who has been crucial in having a positive effect on Nirmala’s psychological wellbeing is Suki, the woman employed by Nirmala and her husband (using their Attendance Allowance) to cook and clean for them. Nirmala was greatly upset by the fact that she could no longer cook for her husband and herself, or clean and tidy the house. However, she was persuaded to employ Suki, a local woman from a similar cultural background as herself. She was at first skeptical that Suki would meet her exacting standards. However, Suki very quickly showed that not only was she an excellent cook, but she also encouraged Nirmala to teach her more, engaging and encouraging her to sit in the kitchen, supervise and be the chief taster! Nirmala will now regularly sit in the kitchen on a specially raised chair and looks forward to the days when she comes.

Nirmala’s psychological wellbeing has improved to the stage where she was taken off her antidepressant medication in late 2014 and has remained well since.